Tillandsia recurvata, Ball Moss or Bunch Moss, is widely distributed and common in the Southeastern U.S. It’s not a moss, but a small bromeliad species that grows epiphytically as an “air plant” on trees, shrubs, and other suitable surfaces in clusters.﻿ It sometimes forms large colonies and can give trees a furry appearance.﻿﻿ A frequent misperception is that the plants parasitize their hosts. What Ball Moss gets from the relationship is a suitable attachment surface in a good growing environment of light, moisture, and rain-borne nutrients from the support trees. Like many other Tillandsias, Ball Moss leaves are covered with silvery-grey hairs known as trichomes that absorb water and nutrients; their roots are only used as holdfasts. 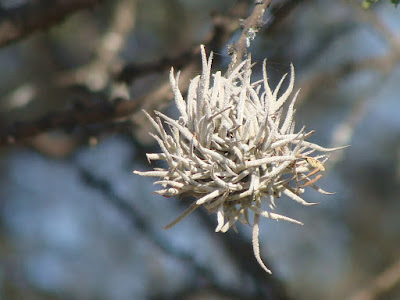 Ball Moss is an adaptable species that has a broad distribution throughout the Americas, from South Carolina to New Mexico south to Northern Argentina and Chile. Of course it has particular requirements for sunlight and rain, especially when germinating and as seedlings, but the plants are remarkable for the variety of surfaces that support colonies, from cacti to utility wires.  ﻿﻿﻿
﻿﻿﻿﻿