Of Porcupine Palms and Bears

﻿﻿﻿﻿
﻿Needle Palm, Rhapidophyllum hystrix, is an interesting species patchily distributed in the Southeastern U.S. The sole member of the genus, it’s generally found in river floodplains and moist bottomlands. It’s scarce or endangered throughout most of its range. In Florida, where numerous populations occur, it can often be found on moist riverbanks, growing above water-loving Dwarf Palmetto, Sabal minor, and below Saw Palmetto, Serenoa repens, which thrive on higher, drier sites. Of course, “higher” when referring to topography in the Sunshine State, is a subtle descriptor.
Needle Palm develops stubby, clustering trunks; highly dissected palmate leaves arise from stems that are armed with long black spines. ﻿﻿ Its flowers and musty or foul-smelling fruit are a formidable deterrent to larger creatures that might consume them. It seems that the species isn’t very good at reproducing. ﻿﻿﻿﻿ Seedlings tend to germinate too close to the mother plants, thus most don’t thrive. Needle Palm is considered a relictual species, one whose ancestors were more widespread. It’s possible that extinct plant-feeders, such as giant ground sloths, were its primary seed-dispersers. Black Bears currently fill that ecological function.
Characteristic of Needle Palms in habitat is the quantity of leaf litter that is in the dense spines. Perhaps this trait has evolved primarily to funnel nutrients to the plants’ roots as the debris decomposes. Maybe physical protection is a secondary effect. The spines don’t stop bears from consuming the ripe fruit; probably Giant Ground Sloths weren’t discouraged, either.  ﻿

The Queen of the Andes 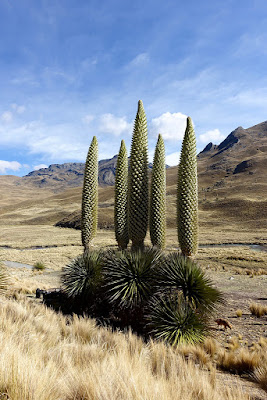 The biggest species, the tallest inflorescence, the longest-lived, perhaps the most dangerous? Puya raimondii is the leviathan of bromeliads, plants in the family Bromeliaceae. As an imposing organism growing in dramatic habitat, it’s an attention-getting member of a relatively unloved genus.

The species is native to the high Andes of Peru and Bolivia, found on rocky slopes between 9,800-15,700 feet. Exposed to harsh sun and extreme levels of ultraviolet light, freezing cold, and desiccating wind, the plants grow to 15 feet tall. When in flower, their spike-shaped inflorescences reach up to 50 feet.  ﻿﻿﻿

Puya raimondii is well-adapted to its challenging environment. The slow-growing plants retain their dead fibrous leaves as an insulating skirt for their woody stems.Leaf edges are fiercely armed with sharp, hooked teeth that catch and resist releasing any vulnerable creature that attempts to investigate the plants. 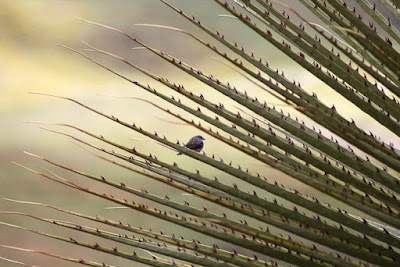 Perhaps due to the hazard they might pose to livestock, or maybe just for amusement, the plants are often burned by locals. Increasingly intensive anthropogenic land use and long term climatological warming and drying is resulting in an overall decline of the species’ fragile populations. Most surviving populations are small and isolated, although a community of several hundred thousand plants is protected in Peru’s Hauascaran National Park.

Puya raimondii can take 80-100 years to bloom. After the hummingbird-pollinated flowers produce many thousands of seeds, the plants die. 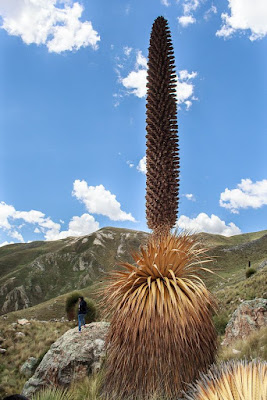 ﻿﻿Conditions in habitat are only occasionally favorable for germination and seedling survival. Although successful in a specific, challenging environment, its remarkably low level of genetic variation doesn’t bode well for adaptation to a changing world.