"If there are no mangrove forests, then the sea will have no meaning. It is like having a tree with no roots, for the mangroves are the roots of the sea."


Mangroves are woody trees or shrubs that are salt-tolerant and grow along coasts in tropical and subtropical regions. Their distinctive and ecologically important communities consist of members of a number of plant families. Mangrove species can be said to have a common lifestyle, rather than being taxonomically related.
The Nipa Palm, Nypa fruticans, is naturally distributed along Asian and Northern Australian rivers and brackish estuarian environments, often in dense stands that can extend for miles. In many areas the palm is a significant and sometimes dominant component of mangrove forests. It’s quite unusual, as palms go. Characteristic of the species is its mild salinity tolerance, which is generally uncommon among palms. The trees develop subterranean, horizontally branching trunks in their muddy, shallow-water habitat. ﻿﻿Nipas form spiky clusters of fruit that resemble medieval weapons. Their seeds are designed to float, like coconuts. Sometimes the seeds will begin germinating before they settle in the mud or sand. ﻿﻿﻿﻿ 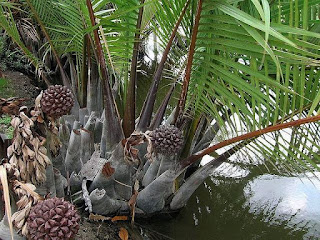 Nipa Palm is both ecologically and economically useful. It provides habitat for aquatic organisms; it stabilizes and protects land from storms and flooding, just like other mangroves. Its leaves make a durable building thatch; its copious sweet sap is harvested to make palm wine and syrup. The fruit is also popularly eaten. Because of the high sugar content of the plant’s tissues, it's an outstanding source of ethanol for fuel production. Nipa stands are environmentally sustainable and require no chemical fertilizer or pesticide inputs.