The African Tree of Life 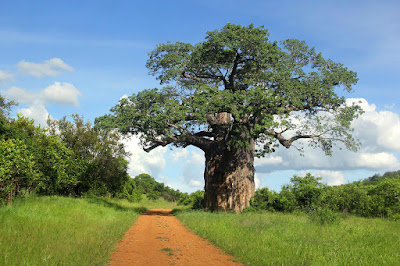 “Wisdom is like a baobab tree; no individual can embrace it." 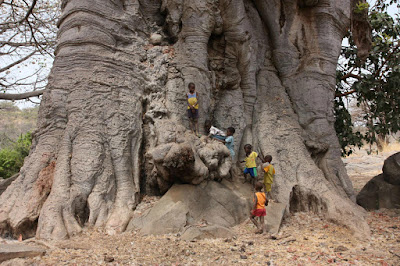 Some trees are strongly associated with the places in which they grow, so much that they become symbols of the places themselves; think of the Coast Redwoods of California, the Pehuen or Monkey Puzzle of the Andean foothills of Chile, or the various species of Australian Eucalyptus. One tree that is distinctly recognizable in the drier parts of sub-Saharan Africa is the Baobab, Adansonia digitata. Baobabs are naturally distributed from the Atlantic to the Red Sea, and to the northernmost part of South Africa. Like other organisms that are so well known that they have been taken for granted, the massive Baobabs still have secrets to reveal. Some of the trees might be a newly described species, Adansonia kilima, according to the latest genetic analysis. Baobabs provide significant environmental benefits to wildlife: safety and a nesting place for many creatures, nectar for the species’ fruit bat and insect pollinators, and a food and water source for elephants. Up to 75-80% of a Baobabs’ bulk is composed of water. 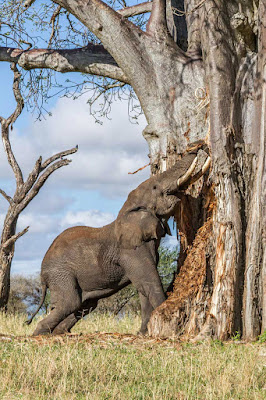 Elephants will often strip away bark and rip and chew through the trunks to satisfy their thirst. Even after many generations of damage, if not toppled, the trees continue to grow.﻿
﻿
Baobabs also provide significant benefits for humans, especially in the driest areas where they grow. Honeybees utilize the hollow limbs; the trees have been used as various forms of shelter.  The fibrous bark makes excellent rope and nets. Leaves are harvested as fodder for cattle, goats, and camels. The pulpy fruit, commonly sold in markets across the continent, is peeled, sliced, and dried; it’s an excellent source of vitamin C. The seeds can be ground into a type of rich flour that is high in fat and protein. Young leaves can be cooked as a vegetable. All of the tree’s edible parts also contain valuable mineral nutrients. Historically, Baobabs were planted along the paths of the slave trade and can be found on the Arabian Peninsula and in the New World tropics. 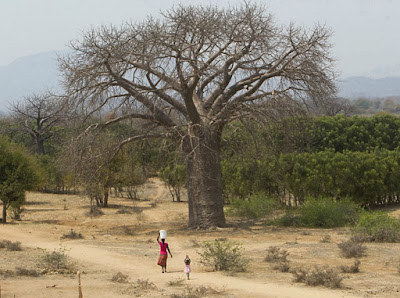 The Baobab prominently figures in many African myths and stories, especially in the explanation of the tree’s “upside-down” appearance. During the dry season, the species endures long periods of leaflessness, and the trees look as though they are growing upside down in the earth.
﻿ 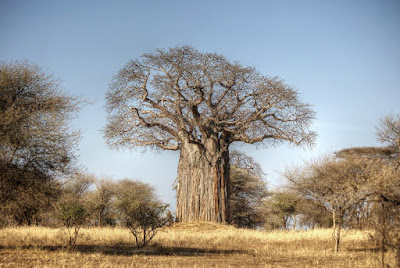 
Posted by asktheplantguy No comments: Links to this post

Living on the Edge: the Cottontop Cactus


﻿
The Cottontop Cactus, Echinocactus polycephalus, is a moderate-sized barrel cactus that lives in some of the driest areas of North America. There are two similar subspecies: polycephalus, the most widespread, found in parts of California, Nevada, Utah, Arizona and northern Mexico, and xeranthemoides, found near the Grand Canyon in southeastern Nevada and Northern Arizona. “Way over to Hell and gone” is an apt description of the species’ habitat. It occurs from the spectacularly desolate mountains overlooking Death Valley to the wretchedly arid flats of the Cabeza Prieta National Wildlife Refuge. 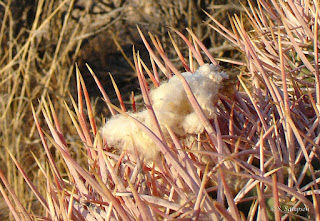 Cottontop Cactus grow in arid or hyper-arid landscapes that usually receive no more than 5 inches of precipitation per year. In the Mojave Desert the species must survive exclusively on winter rainfall, but plants in the Sonoran Desert occasionally experience summer thunderstorms during the monsoon season. In the hot, stony wastes in which they grow, the sparse rains quickly drain away or evaporate.
﻿ 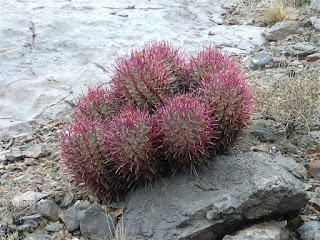 The barrels grow to about 2 feet or so, gradually branching from the base to form clumps of up to 50 heads. Thick, fierce spines give the heads the appearance of medieval weapons. Rainfall temporarily turns the spines brilliant red. Given the slow rate of growth, it’s thought that large plants are over 100 years old. New growth tends to occur in Spring, months after the Winter rains have ended, and flowering takes place during the scorching heat of Summer.

The ripening fruit is embedded in a dense mass of tough, white fiber, thus the name "Cottontop".

Packrats and other rodents have to chew through the protective spines and fiber to get to the fruit.

Seeds found in ancient packrat middens indicate that the species has been dancing around its current range for the past 30,000 years. Favorable conditions for seed germination are infrequent occurrences, and seedling growth is very slow. With increasing temperatures and the long term prognosis of climatological drying of the Southwest, the survival of this tough, tough species in its exquisite environmental niche is, unfortunately, in question.