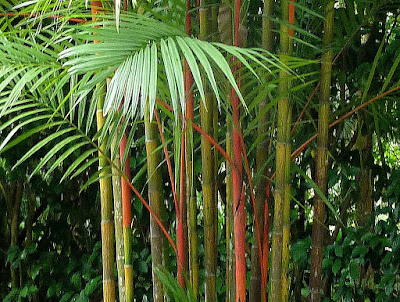 And what an appearance!  One of the world’s most beautiful palms, the tree’s graceful, thin, green-ringed trunks support dazzlingly red or orange crownshafts and colorful feathery leaves.  Outside of the tropics, it’s considered a “holy grail” plant for gardeners; a palm that is both difficult to find, to accommodate, and to grow in a non-greenhouse setting. If you’ve ever visited a public garden or park in the tropics or a large conservatory in more temperate zones, the species can frequently be found planted en masse or prominently displayed as a specimen. The Sealing Wax Palm is commonly used as a landscape tree in wet tropical climates. 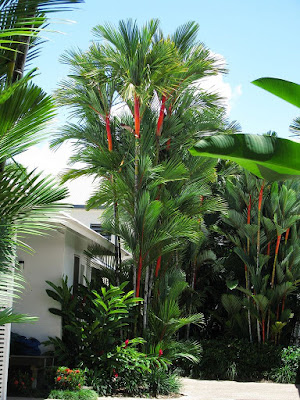 Having so much horticultural value, many plants have been removed from the wild. The International Union for the Conservation of Nature (IUCN) listed the species as threatened in 1995, thus motivating Indonesia to pass protective legislation. Cyrtostachys renda was no longer considered at risk by the IUCN in 2000. ﻿﻿
Unfortunately, IUCN listing or delisting often does not predict an organism’s survivability in the current age of rapidly increasing environmental stress. It’s not possible to assess the conservation status of all of the world’s species; many thousands are undescribed and doubtlessly pass from the biological stage without our ever knowing of them. Assessments are based upon field surveys that can only give a snapshot of a species’ populational health and abundance. In some instances, all it takes is a forest to be logged out, cut, or burned for agricultural conversion, drainage of a marsh for construction of a new housing project, the local loss of a specific pollinator, or sustained harvesting or poaching to result in a species’ extinction. Of course, underlying most environmental stressors is the big one that “rules them all”: climate change inevitably disrupts the subtle and complex phenology of entire biological communities. It’s difficult to ascertain just how stable wild Sealing Wax Palm populations really are. It should be assumed that since the species’ habitat is highly threatened, especially by conversion to Oil Palm plantations, then the palm probably is, too.
﻿﻿
﻿﻿﻿﻿﻿﻿﻿﻿﻿﻿﻿﻿﻿﻿﻿﻿﻿﻿

The peatlands or peat swamp forests are highly threatened ecoregions in Southeast Asia. They function as huge carbon sinks, holding the accumulation of thousands of years of plant growth. Dead plants don’t break down easily in the water-laden, oxygen deficient ground, and the carbon in their bodies remains naturally stored as peat. Peatlands are ancient, biodiverse, and store more carbon than other types of tropical forests, including the better-known rainforests. When they are drained and set ablaze for clearing, immense amounts of carbon dioxide are released into the atmosphere, adding to global warming.