Cycads: Life in the Slow Lane 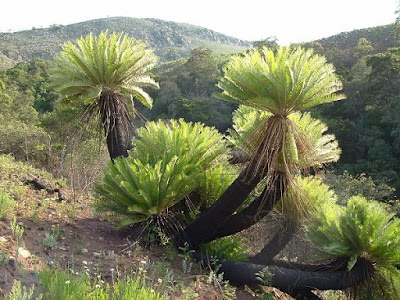 Gardening is an endeavor that can teach us many things about life. Surely one of the obvious lessons is patience: patience to make garden designs become a reality, patience to nurture plants and watch them thrive. Patience is needed when setbacks occur from pests or disease or truly damaging weather events like cold snaps or hurricanes. Unless our gardens are composed of annuals that quickly cycle through blooming and replacement, we learn patience from watching our plants grow in time into beautiful specimens. 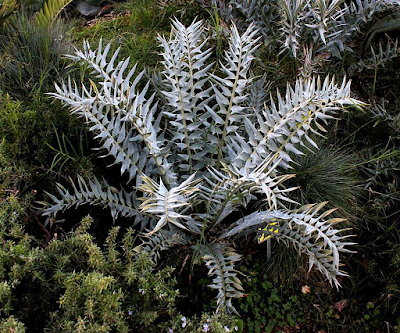 Cycads, seed-bearing plants that are frequently mistaken for palms or ferns, are perhaps the ultimate slowpokes in our gardens. They are members of three very closely related families whose nearest relatives are conifers, such as pines, and the Ginkgo, an ancient tree species widely planted in northern landscapes. In books and films, cycads are popularly portrayed as primitive plants that were grazed upon by dinosaurs. The origins of the cycads reach far back in geologic time to the dinosaur period and beyond, but the origins of present-day species are much more recent. Today, cycads are considered relic survivors found in the New World, Africa, Asia, and Australia. Some cycad species are amongst the rarest of plants, with populations that are scattered and highly localized, sometimes to a single hill or mountain. Nevertheless, within their native ranges, certain cycad populations can number in the hundreds of thousands or even millions of individuals. 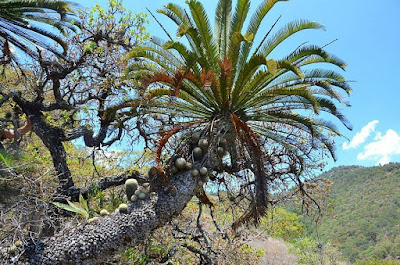 Cycads are magnificent garden plants that live on a timescale that can humble us short-lived humans. They often grow slowly, take a while to reach maturity, and have lifespans that can stretch through centuries. Unfortunately, many cycad species numbers are dwindling or threatened with extinction. Human-caused habitat alteration and loss are the great dangers posed to their survival. Changing climate that increases the occurrences of drought and intense fires also plays a part. Due to rarity, slow maturation, and difficulties in propagation, certain species have come under intense illegal collecting pressure, pushing them to the point of disappearance in the wild. Ongoing Cycad conservation efforts focus on research and increasing both the numbers and sustainability of wild populations. An additional benefit of all this attention is that valuable horticultural knowledge has become available to gardeners who are interested in growing cycads. 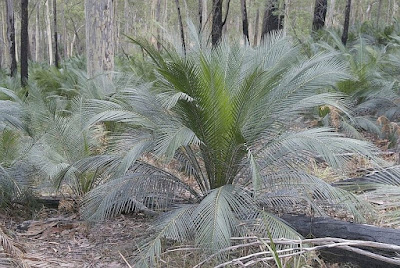 The fascinating reproductive strategies of cycads could easily be the subject of a dedicated lengthy blog post. Cycads bear cones on separate male and female plants; sometimes odors and heat are generated within the cones  to attract specific insect pollinators, required to produce viable seeds. When habitat pressures eliminate wild pollinators, or when the number of adult plants of reproductive age falls below a certain density to maintain pollinator populations, the cycad population can become functionally extinct. If the unfortunate species is only found in a single location, it's game over. In cultivation, however, male pollen can be stored and female cones can be hand pollinated. Some cycads produce offsets that can be detached and rooted to produce more plants. 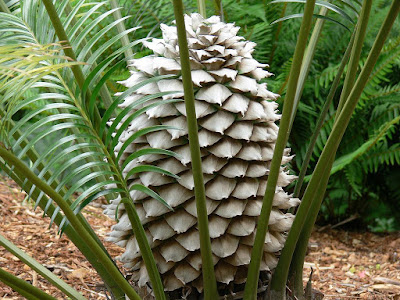 Probably the best known cycad is the Sago, Cycas revoluta, originating in Southern Japan and its offshore islands, but now popular worldwide, even as a houseplant.  Many desirable cycads originate in South Africa, growing in places that are drier and have lower humidity than Florida. There are still many species, however,  that do well in South Florida. Some make superb xeriscape specimens, while others will thrive in irrigated garden settings. Of course, many cycads from Summer- rainfall regions of Africa and Asia as well as from areas of Mexico, Central and South America and Australia are suited to South Florida gardens. Our state even has its own native cycad, Coontie, a quite adaptable species. 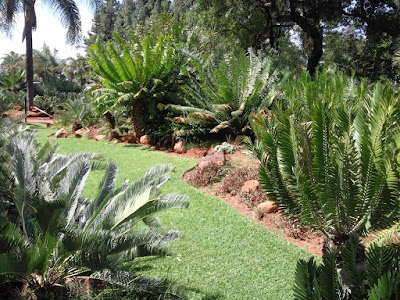 A severe threat to the numerous species in the genus Cycas is the Aulacaspis Scale, Aulacaspis yatsumatsui. originally native to Southeastern Asia. The insect has been inadvertently introduced into various locations around the world, where it has no natural predators. In Guam and other Western Pacific islands it has virtually eliminated the native Cycas micronesica. It is a serious horticultural pest in Florida, where its presence has essentially ended the cultivation of Cycas without constant vigilance and treatment of infested plants. 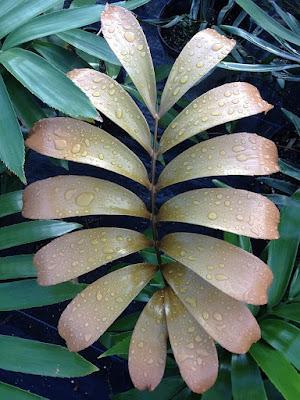 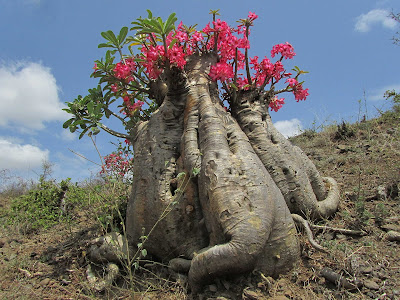 Gardeners in South Florida are succulent-adverse. Some seem to think that all succulents come from deserts and won't grow here, or have undesirable spines, or are basically uninteresting. We are attracted to flashy colors and often don't understand or appreciate the forms and survival strategies of the plants that we grow. Consequently, nurseries and home centers meet the lack of demand by offering few succulents, so the feedback loop continues. In fact, many succulents are well suited to our seasonally dry climate and fast-draining soils. They can have extremely showy flowers, great color, and striking forms. Above all, the survival strategies of succulents are some of the most amazing of any plants. 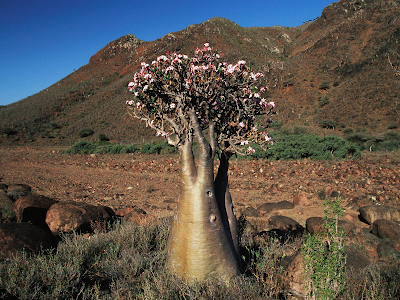 An interesting genus of Old World succulents, Adenium, is popularly known as Desert Rose. Unlike true roses, adeniums are thornless. Adeniums can be found from the Arabian Peninsula to Southern Africa, as well as the floristically fascinating island of Socotra. The genus is part of the larger Apocynaceae family that includes Plumeria or Frangipani. Indeed, the relationship between Desert Roses and Frangipani is easily seen in the similarity of their flowers. Like Frangipani, Adeniums are the subjects of intensive selection and breeding programs to produce all sorts of horticultural cultivars. Flower color, patterns, and size have been greatly modified from the wild ancestors, often resulting in additional secondary changes to the overall form of the plants. 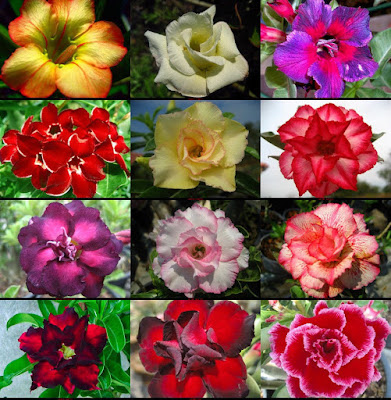 Adenium obesum is the most widespread species of the genus. In the past, its many geographic forms have generated much taxonomic confusion. Previous assigned species names such as arabicum and somalense have all been subsumed within obesum, despite the morphological differences. Local forms of the species can be found in Kenya, Somalia, Saudi Arabia, Yemen, and Oman. Some are small shrubs, others large, and others tend to grow as small trees. No matter the shape, all have similar horticultural needs. All Adenium obesum will thrive in South Florida. 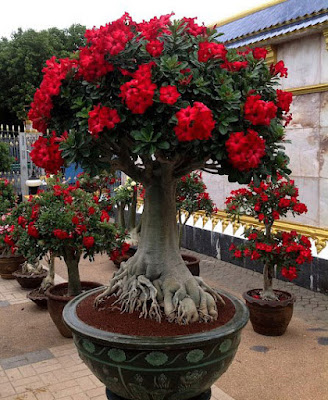 Grow adeniums outdoors in full sun, in very well drained soil. Adding some none-limestone rough gravel, such as lava rock or expanded shale to the mix is a good idea. Coarse silica or granite sand also helps with drainage without raising the soil alkalinity to an unacceptable level. Adeniums tend to be quite frost sensitive, so preventing them from turning to mush on the coldest South Florida nights will require some protection. They are great in pots, especially those made of terra-cotta that offer quick evaporation and gas exchange for their roots. Use a very porous mix that incorporates much perlite and/or gravel to speed drainage. If the wet potting mix won’t hold together when squeezed in the hand, it’s the correct porosity. Whether planted or potted, mulching adeniums with gravel is a natural and very attractive way of displaying them. Give them a slow or controlled-release fertilizer that contains some microelements and is fairly low in nitrogen, such as 8-2-12. Even 10-10-10 or 7-7-7- will work, as long as the nitrogen isn’t too quickly available for the plants. Water these heat and light loving plants regularly during their active summer growing period. To prevent rot, they must be allowed to dry out completely between watering. 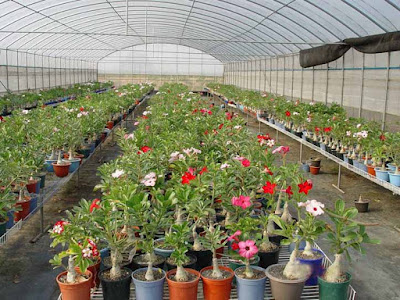 Adeniums tend to go semi-dormant in the winter, losing most or all of their leaves. They don’t need much water during those times, but also don’t appreciate being completely bone dry for months on end. They like an occasional soaking drink, as long as they can dry quickly. Even though the plants might be leafless, they are still actively using sunlight. Lightly scratch a Desert Rose’s silvery-grey stem. Underneath is a thin green layer that continues the job of photosynthesis, even without the presence of leaves. 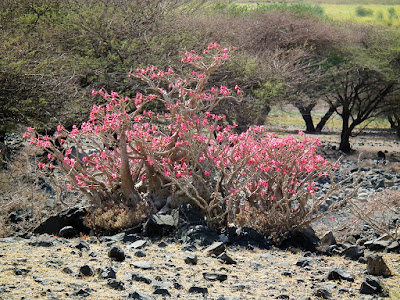 Horticultural varieties of Desert Roses, especially grafted plants, don’t always produce the same thickening at their base (caudex) that wild forms are famous for. Some greatly resemble their frangipani relatives by not thickening at all. To produce a thick base for display, gradually remove some soil and raise the level of the plant in its pot or replant it in its bed with a portion of its roots exposed. Doing so will not cause harm, as long as any freshly severed roots are kept dry to prevent rot. 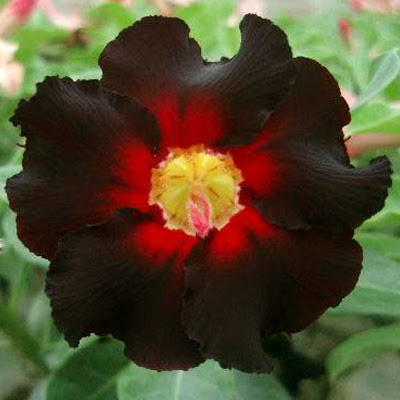