The Grandest Flower Show-
"The Philadelphia"
Part 1- The Spectacle 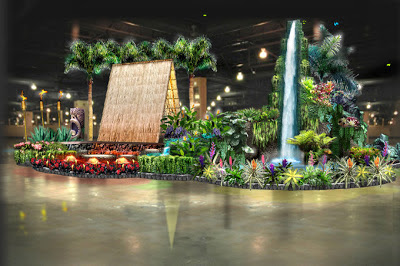 For the last 5 years, I've had the honor of judging horticulture entries at the Philadelphia Flower Show. It is the grandest flower show in the New World, exceeded only by the Chelsea Show in London, and some of the Dutch floral exhibitions. The "Philly", as it is known locally, is held in March in a massive convention hall that covers 15 acres. The first impression as you walk into the hall is to gasp at the sheer magnitude of the show, the size of the exhibits, and the stunning complexity of the entire affair. Some of the landscape exhibits are larger than my backyard, yet the exhibits have been set up for less than a week. As your eyes scan to the distant walls, you see great display rifts of flowering bulbs, venerable hanging plants that have been well tended for many decades, and the Marrakesh that is made up of hundreds of vendors selling their garden wares. There are hundreds of plants entered for judging, evaluated by judges from around the country. The entries range from miniature alpine gardens the size of a baseball to formal topiary trees to myriad succulents, ferns, flowering bulbs, and the iconic tulips, jonquils, and Spring annuals. 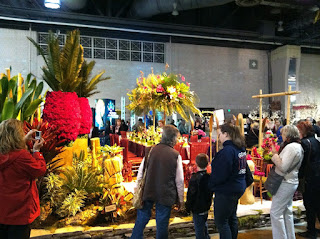 Everywhere on the streets in the local vicinity, you see people walking with bunches of flowers and flowering plants purchased at the Show, or people walking to the show as if it were Mecca. The Show is the largest attractor of visitors to Philadelphia in a given year, and the attendance is almost equal to the city's population ! The show is a truly a destination attraction, and the visitors' reactions are interesting to watch as they ogle and photograph the overwhelming displays of plants. 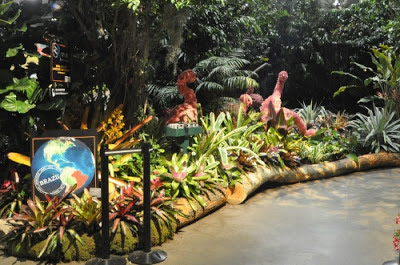 The show has been staged for over 140 years, likely making it the longest running flower show in the New World, exceeded in longevity only by the Chelsea Flower Show. The "Philly" has morphed over the ages, as have almost all flower shows. The competitive entries for judged plants have decreased, where landscape displays and the vendor's markets have increased. In the years I have judged the competitive entries in several classes, I still marvel at the grandest specimens of some plants I have ever seen. One of the grand champions every year is an impressive Clivia miniata of giant dimensions, movable only by several strong people or a small forklift. 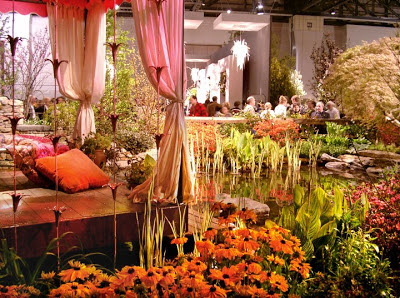 It is no small feat to get these dazzling plants to flower at this early time of the year. It takes months, if not years, to stage and groom and schedule plants for flowering in the late winter months. To get the flowering bulbs to the show in show-quality shape is an awardable feat unto itself. The artistry, talent, logistics, and costs of staging these displays is commendable on the parts of the vendors and artisans who show their work. If you wish to visit one of the grandest shows in the free world, visit the Philly, in the chilly month of March. The visual and fragrance overload is worth the price of admission alone.

Posted by Pinecrest Plant Guy No comments: Links to this post

Giants and Dwarfs- A Tale of Heliconias, Part 3

﻿ ﻿ As with so many plant groups, there is a wide range of sizes to choose from when planning a garden or selecting a plant for the landscape. This is especially true in Heliconias, where there are species as small as 2 feet, and as tall as 50 feet. In South Florida, we can grow a great many varieties of Heliconias, primarily limited by their tolerances to cold weather and windstorms. There are 2 basic growth types in the genus: running-rhizome and clumping-rhizome.

In this medium-size, non-running group, often comprised of the H. caribea and H.bihai  hybrid lineage, there are dozens and dozens of plants available which grow comfortably in the 7-14 foot height range. I would arbitrarily call these the "medium" height group, as opposed to the "giants", from 14 to 30 feet.

This group is fairly easy to grow, the clumps of stems stay tight together without spreading too much, and the flowers are quite flashy. The group has both upright and pendant flowers, although the pendant-flower plants tend to grow more erect and taller than the upright-flower types. They like a lot of strong light, and will grow nicely in all-day sunlight, if there is ample water and protection from strong wind, especially in the winter.

One of the biggest keys to success is to keep the plants well fertilized. A well grown clump of Heliconia will require more fertilizer than almost any plant in your garden, and equaled only by bananas as gluttons for food. In our area, we install a new plant with several pounds of controlled-release fertilizer in the planting soil, along with an equal amount of organic fertilizer such as compost, activated sludge, or rose fertilizer. The plants grow into their new homes quickly, but we still maintain a quarterly liquid fertilizer program heavy on magnesium and potassium, 2 components that Heliconias really need.


To reiterate the basic needs to grow this genus successfully, be prepared to water and fertilize the larger species often, give them plenty of space, abundant mulch and organic material, and some occasional removal of old stems. Once they are well established, this genus will put on a show of flowers unrivaled in the landscape world.


Posted by Pinecrest Plant Guy No comments: Links to this post