And You Thought YOUR Snails Were Big.........
Recently there has been an incidence of Giant African Land Snails abbreviated as GALS, in the Coral Gables neighborhood in Miami. The local residents have seen a few snails here and there, but as with all introduced pests of any size, it is cause for caution and observation. 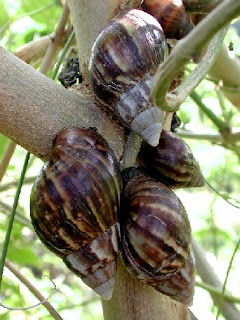 Make no mistake about the creature, it is a large snail, with a shell measuring over 6 inches long. As with many snails, it has an appetite for plants, and this species can eat a LOT of plant material. It would be bad enough if the snail just ate plants, but this species also carries a disease that can affect your health: meningitis. The snails are available through pet stores worldwide, and are used in religious ceremonies, especially by Caribbean religions. After a boy smuggled a few snails into Miami as pets in the 1970s, they quickly became a serious pest. The Department of Agriculture eradicated them in 3 years after a protracted program of hand-catching the snails using a house-by-house search method. Within the last 6 months, the snails have been seen in local areas, and the search begins again for these invasive pests.
Fortunately, the snails can be eradicated using the same control protocols as other snails. Snail baits and organic snail controls will work but you must use them diligently to get the full degree of control. This is one pest which we need to leave the state permanently. I do not support the idea of eradicating all snails, but several species in Miami are serious pests, and we don't need a Godzilla version of a pest to start a family in our neighborhoods.
This species is another example of how an escaped pet can wreak havoc in our area. South Florida has the warmest and rainiest climate on the continent. We are unfortunately the crossroads of animal and plant trade for the US, and both of them "escape" into the Everglades, as well as into other states. Several excellent examples of this are Imported Fire Ants, Asian Cycad Scale, Old World Climbing Fern, and Hydrilla Fern. We enjoy this amenable climate, but we need to protect it far better than we do. The exotic pet trade has allowed many animals into homes, and then into local environments, including iguanas, pythons, and monitor lizards. Giant Land Snails are just as unwelcome, and should be controlled diligently.
Craig Morell
Pinecrest Gardens                           ﻿
Posted by Pinecrest Plant Guy No comments: Links to this post

Can we really plant Hummingbird gardens ?

I believe the answer is "yes". It would be safe to say that, as with butterfly gardens, it is not a plant-a-few-plants-and-they-will-arrive scenario. As with butterflies, hummingbirds enjoy sunlight, plenty of plants to feed on, and instant availability of shade cover in which to escape from predators. Planting a wide variety of plants attractive to butterflies often nets the added benefit of attracting 'hummers'.

In this section of the country, we have a small selection of hummingbird species, even during migration season. By far the most common species is the Ruby-Throat, and if you're really lucky, you'll see the emerald green flash of a male bird, about the size of a small dragonfly, and moving even faster. The bird's ability to defy the laws of aerodynamic flight is simply amazing. The birds can start and stop in no time at all, and they are fun to watch if a group gets together in a feeding area. The border wars for feeding areas between dueling male hummers is quite a show.

﻿ ﻿ Attracting these flying jewels is a game of patience and skill. They take a long time to find new plants to feed on, and are wary of intruders, especially pets. The birds feed on a very wide range of plants, as long as there is ample nectar to feed on. A lot of bird books state that the birds feed mostly on red, tubular flowers. Our hummers at Pinecrest gardens feed on yellow shrimp plants, purple Hong Kong Orchid Trees, blue bromeliads, orange heliconias, and anything else in their range of vision.  I am convinced that our local birds are illiterate, and have not read the books ! It is true that red tubular flowers such as Lobelia, Salvia, Russellia and Bignonia are on the list of favorites.


﻿ ﻿
In South Florida gardens, there are lots of flowers for hummers to feed on, and a few of my recommendations include the blue-flowered bromeliad Portea petropolitana ; a Dwarf Orchid Tree , Bauhinia divaricata; Yellow Shrimp plant, Beloperone guttata; and Firecracker Plant, Russellia equisetiformis. Install attractor plants in large groups of 8-15 plants, in areas where the birds can dash under cover fast ( they do everything fast). A better term for such a garden would be "wildlife garden", since a wide range of flowering plants will attract many types of wildlife, including hummers, butterflies, nectar-feeding birds, and a range of others.

﻿ ﻿ It is best to mix plants that need shade as well as those needing a lot of sunlight. An attractive garden can be made that will serve many needs; attract wildlife, have a wide range of colors and provide shelter for birds. Rather than plant a garden for just one purpose, plant a garden that does a lot of things at the same time. Fragrance and color and even edible plants can be mixed without trouble, and the availability of interesting plants has never been better.


﻿﻿﻿ ﻿﻿﻿﻿ ﻿ If we start to look at gardens as a holistic part of your home, where plants have form, function, and beauty, then gardens take on the importance I feel they should have. So many people have a house and "some landscaping". They are part of each other, and should be cared for and budgeted as such.

Preparing Your Garden and Turf for Autumn

"Autumn" in South Florida is such a subtle concept that you would need a calendar to know when it happened. Perhaps the more accurate terms for what Northerners would call Autumn would the "less rainy" season, or the "I don't sweat all day" season. It means that days are getting shorter, the heavy rain and high humidity will slowly diminish but the daytime heat will continue. This means several things for your garden. Grass will still need watering, but by November, it will need less, as it will respond to short daylengths and start to slow down. You can help this by using a lower-nitrogen fertilizer, such as 15-0-15 or even a 12-2-12. The equal balance of the first and third numbers is important, since it fosters root and stem development, not so much leaf and grass growth.


Trees will really slow down growth, and some have stopped already. We might even see some light defoliation in the very dry days of November or December. This is the time of year to give them less nitrogen, and more potassium. The same types of fertilizer for palms can be used very effectively on palms and trees together. Flower gardens should be cultivated and cleaned before the winter annuals or vegetables are planted. Mulch should be applied to keep roots moist, and to retard weed growth from the crop of weeds which set seed in the short days. This is a good time to fertilize to get iron and manganese into plants before the soil is too cool to allow plants to get it from granular fertilizer.
﻿
﻿
There are numerous plants which get going in the cooler Fall weather, as the stress of summer heat wears off. Rhizomatous Begonias, ferns and roses really start growing starting in October. Fertilize them with controlled-release fertilizers, as well as some liquid iron and manganese to get the plants pumped up on these metals before the cooler days are here. Many annuals are ready to plant, as are a wide variety of herbs and vegetables. You can start seeds of Spring plants now and grow them through the winter for planting in March. This is also a great time to tend to greenhouse and shadehouse repairs before winter storms are upon us.
﻿﻿
﻿﻿
The weather will remain warm for another 8-10 weeks, and the soil will remain warm even longer. This is the time to use organic fertilizers wherever possible to avail ourselves of the warm soil to start the breakdown into usable nutrients. Compost, eggshells, and  coffee grounds make excellent soil additives. Many plants and trees enjoy the break form the brutal summer sun, but beware of trying to over-do fertilizer and be careful of trimming too much. Although the weather is still warm, the plants will start to slow down, and won't regenerate growth very quickly.
Get plants pumped up for the winter, starting now. Reduce fertilizer in your gardens in December, and resume in March when the daylength gets appreciably longer. Plants will "wake up" at the Spring equinox.
﻿
We're entering the season of amenable weather. Prepare your garden for the tandem duties of some plants going to sleep for the winter, and some plants just starting lives in the short days. Enjoy the weather and your garden as well.
Craig Morell
Pinecrest Gardens
﻿
﻿
Posted by Pinecrest Plant Guy No comments: Links to this post