When Good Plants Go Bad
Assigning ﻿the term "weed" is a really subjective thing, mostly. The bulk of the gardeners out there use the term casually ( kill it ! It's a weed ! ), among all the other colorful phrases that go with weed incursions into a garden or landscape. If you ask 10 gardeners what defines a weed, you will likely get at least 6 different answers. A lifetime ago in college, I heard the best definition of all: 'weeds are plants growing out of place'.
This is, in my opinion, the best of all definitions, since what makes a weed in my garden may be a valuable plant in yours, just across the street. We have removed a great many Cluster Fishtail Palms at Pinecrest Gardens to remove the sources of itchy seeds and rampant growth that comes with this species. Across the street in a different environment, the plant is a valuable landscape specimen. In many lectures I make the point that the fabulous Royal Poinciana Tree is a gorgeous, valuable tree in almost any landscape, unless it is growing in your driveway or on your rooftop !
﻿
﻿


One of the curious aspects about renovating a historic garden is the ethical dilemma of whether to save some plant species because they are historical, or remove them to save the garden due to their risks for damage. Some of the species we are removing were considered good landscape plants 40 or 50 years ago, but are now regulated as weed species such as Melaleuca, Carrotwood, Australian Pine, Mahoe, Bishopwood, Norfolk Island Pine, Schefflera, and a long list of others.  It would be an easy decision to take the moral high ground and order that " all weeds must die! ", no matter their historical nature. In my case, I chose the ethical middle-of-the-road line ( as I am wont to do). I chose to remove MOST of a population of the nasty weed species, and in some cases have replaced them with a species that resembles the removed weed species but which have better manners as landscape plants.
﻿
﻿

A few good cases to illustrate the point :

remove invasive Spiral Ginger and replace it with the tightly clumping Barbados Ginger; take out the bug-magnet Golden Hedge Bamboo and replace it with Angel Mist Bamboo, a largely bug-free species; take out running Heliconias and replace them with clumping Heliconias. The list goes on and on, with myriad choices to look at to switch out a weedy species with a better-behaved species.
Some countries and states have weed assessment protocols or weed-risk analysis tables. These are comprehensive protocols and can be as much as 100 criteria in length. In Hawaii, New Zealand and Australia, some of these assessments produce a weed-risk number, the higher the number the worse the risk for weediness. In a curious case of extremes, the worst weed in Hawaii and Fiji is a plant called Miconia, but it is unlikely to be a bad weed in Florida since we have cold weather that would certainly kill it. In reverse, Australia's Melalueca quinquinervis is a "normal" forest tree in Australia, and is one of the worst weeds in the USA, but only in south Florida.
On any scale, unwanted plants in our landscapes consume resources of water and fertilizer, spread where they are not wanted, and outcompete valuable species. The ramifications can get really complicated from there as to the impacts of weed species on ecosystems. There are weed fish, weed birds,weed animals, and in some opinions, weed people. One thing is certain: introduced / exotic species have made a huge negative impact on our fragile ecosystems. Many species are escapees from nurseries, pet and fish farms, animal breeders, and animal importers. Some of the more newsworthy species like Burmese Pythons and Green Iguanas have been released by pet owners who no could longer house their pets. One of the fastest growing vines in South Florida is Wood Rose, whose seeds are a common curio sold at tourist attractions and airports in Hawaii. Left unchecked for just three months, it can consume an acre of land with an impassably thick carpet of vine.
The USDA and various other agencies have been handed a burgeoning job of trying to eradicate or manage these often aggressive imports. I would like to make mention of one important point: not all exotic species behave badly and make trouble for the native species. The native-species conservationists often rally-cry that if we just stick with native species everything would be all right again. Even some native plants and animals can be weeds if planted in the wrong spot, or are not managed properly. Without the check-and-balance of natural controls, anything can get out of hand and become a "weed".  Let's use the more correct term "management" instead of "eradication", let's learn how things get out of hand, and let's look anew at ways to "manage" our species problems. You might find that the control is easier, cheaper, and more sensible than you ever thought.
Craig Morell
Pinecrest Gardens
Posted by Pinecrest Plant Guy No comments: Links to this post 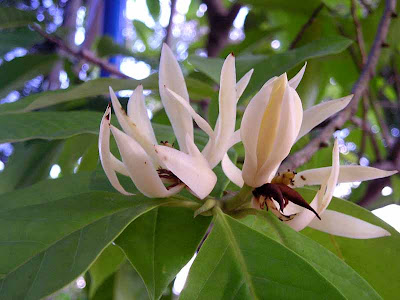 Michelia alba, the Joy Tree
﻿Normally I would not single out a species for this blog, but there are some plants which captivate everyone who sees them. I have visited many public gardens and I could construct a short list of plants that have a huge "wow" factor to them. Some of these plants are temperate, such as Tuberous Begonias, Camellias, Peonies, Fuchsias and Meconias, but some are tropical. Unfortunately, not all really spectacular species can grow in South Florida for the long term.One of the flashiest trees of all is the legendary lady Amherst Tree, Amherstia nobilis, but the tree is so temperamental that the closest most people will get to seeing one is in a book.Some species, however, actually are good landscape plants, and the Joy Tree is one of them.
Some years ago, I encountered a Joy Tree, Michelia alba. I was smitten immediately by its fragrance, a rich but light mix of jasmine, peach, and fresh bananas. This tree is now considered by some taxonomists to be a Magnolia, but I prefer the mellifluous sound of its genus name, and I am sticking to it. It grows well in warm areas, and in South Florida it can be in flower much of the year. Naturally, there are several selections of the species, but I have not seen named cultivars on the market just yet. There is a closely related species, the Champak Tree, also called the Champaca Tree, Michelia champaca, with a different fragrance, and yellow flowers. The Champak Tree sets seed readily and grows quickly into a flowering specimen, whereas the Joy Tree is usually grafted onto a Champak rootstock to increase its vigor as a landscape tree. Consequently, Joy Trees are more expensive than Champak trees, but may be worth the extra expense.

The name of the tree stems for its use in Joy perfume, one of the most expensive produced. Both the orange Champak and white Joy trees grow alike, although the orange form grows a bit faster than the white. Both trees enjoy a good sunny spot in the garden, with rich soil, ample water, regular fertilizing, iron supplements and plenty of mulch. The results are worth the effort ! The flowers produced are fragrant on a level most people don't know or have ever experienced. This is an excellent candidate for planting where the prevailing wind can go through the tree and waft the fragrance toward the house.


The trees are often available at plant sales and shows, especially if you are lucky enough to be near a sale from the Miami-based Tropical Flowering Tree Society. On the southwest coast of the state, such trees are seen more and more often, a real boon, given the balmy and protective climate offered in Naples and the coastal areas. This is a tree that deserves more merit as an urban planting. In protected areas, it could serve an interesting purpose: fragrance in an urban landscape. As a collector's tree, it grows well and is well-behaved, not growing too fast or with brittle branches or messy seed pods. I hope you have the pleasure of experiencing one of these trees soon, for it will change your mind about what people plant in their own gardens.

Posted by Pinecrest Plant Guy No comments: Links to this post